After such a successful debut season with the Volvo in 2014, we were left feeling very confident with the aerodynamics of the S60 V8 Supercar. Obviously the other manufacturers were confident that we had done a good job too because in 2015, no less than three manufacturers elected re-homologation of their aerodynamic packages. Even from the increased competition our Volvo brought home 5 pole positions and 5 podium finishes. Without having to concern ourselves with redesigning the body of the car, we pushed for a better understanding of the car, paying particular attention to maximising the cooling efficiency of the components.

The Volvo squad has had a real boost for 2016 with the addition of James Moffat. He is a very experienced and talented driver, known for his ability to wring the most out of a V8 Supercar. He, and GRM mainstay driver Scott McLaughlin, have a great friendship on and off the track and we’re really excited to see what they can put together when sharing their ideas and tips for tackling the circuits. 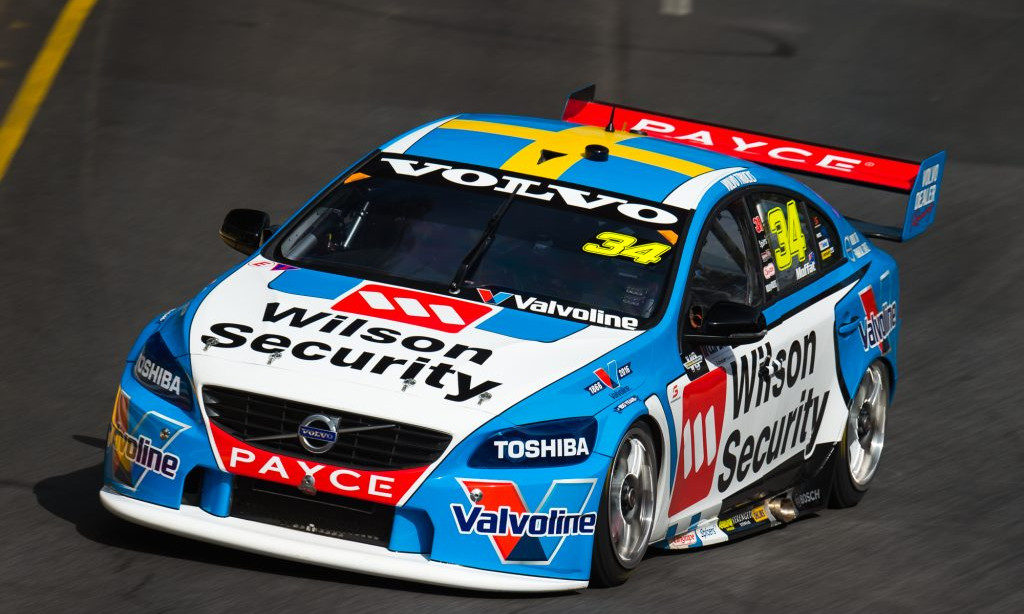 In 2015 we had a successful rookie campaign in the Dunlop development series. James Golding finished 10th overall in a hotly contested series, all the while showing the great team-work ethic that is a hallmark of GRM. In 2016 the Development squad expands to two cars; James Golding returning and looking to continue his strong form from last year, and teaming up with development series debutant Richard Muscat. Richard is young but already an accomplished driver with experience in the Porsche Carrera Cup and winning the Australian GT championship in 2014.

The Development series cars will be the 2013 specification Holden VF Commodore running the 650hp 300ci Holden motorsport V8 (US readers would recognise these as Chevrolet SS).

In keeping with the tradition of GRM and helping people develop their skills, backing up these two young drivers is also a young crew who are learning to build, maintain and run a championship contending race car. Our new expanded development series team has proved to be very competitive at their first meeting with fifth position from Richard Muscat in his debut race, and a second place podium finish on the weekend for James Golding. We can look forward to big things from this team as well as our Volvo’s through the course of 2016. With the great driver team ups taking place this year, why can’t the engineering team join in? This year we are working closer than ever with Applied CCM and we already have some exciting projects to develop efficient models. This will involve the most significant step up our CFD program has seen since it began.

When we began using Pointwise in 2012, we had an existing CFD program that was quite significant in size. From our business perspective, the major appeal of Pointwise is that it is designed as an independent meshing platform for the creation of CFD meshes. It is obvious that Pointwise has taken special care in developing the software to be a branch in the project workflow rather than skew the generated mesh towards preferred solver platforms or having legacy issues which stem from the program being expanded to work with software it wasn’t originally intended for. We have seen these issues before and they create unnecessary complications for the user.

That ability has become an important aspect of Pointwise in 2016 as our technical CFD partner, Applied CCM, recently released their solver platform Caelus, which was forked from OpenFoam. It is a solver library for the numerical problems faced in engineering. Our early discussions with Applied CCM have generated some great ideas. The range of possibilities and scenarios is quiet endless in CFD because nearly any scenario can be recreated with none of the technical limitations of real world or wind tunnel testing. Though model size is an important consideration as it will lead to greater computing costs, we’re working with Applied CCM to generate efficient models which still give us the desired outcome. We’re looking forward to the features of Pointwise V18  with unstructured quads and hexes.

Until now the solving platform we’ve used was finite element based with nodes placed at the element vertex and it has generally had low sensitivity to the mesh quality. Caelus, is a finite volume solver and due to the node placement at the centroid of the element, it cannot tolerate significant element skewness. A big advantage of Pointwise in this regard is that the node spacing can be easily adjusted along the connector to give good distribution at the connector intersections; the first node placement can be set so the 2D and 3D meshes can produce a high degree of element orthogonality and give the best outcomes in the solver. With Caelus and the assistance of Applied CCM, we have decided this year to move all of our meshing operations into Pointwise. One of the main reasons we began using Pointwise was because it is so efficient at creating the volume mesh, but it is also every bit as efficient at producing a surface mesh and pays a great deal of respect to the CAD geometry it’s built on.

Another feature that really makes it come into its own is the ability to stitch together water tight domains on both the CAD level and the mesh level. We frequently make adjustments to the CFD models by importing only small sections of updated CAD. Occasionally the surfaces have difficulty stitching together due to file conversion processes and it becomes inefficient to chase this issue when a mesh can be created on the surface and merged with the connectors around it. It gives the operator a two pronged attack, and while it’s a simple concept, it goes a long way to making the meshing easier.

As mentioned in “Aerodynamics of road vehicles” by Wolf-Heinrich Hucho, wind tunnel testing describes the “what”, while the CFD helps explain the “why” of the aerodynamics. With wind tunnel testing being banned in the V8SC category, we are left to ensure that the computational simulation is of a quality that will resolve the forces on the body and represent the flow that the car will experience on the road. This requires not just a 2D surface grid but the ability to generate the inflation layers and volume elements that will adequately capture this.

Something which we quickly implemented in the new mesh was the 2D T-Rex for efficient use of elements while more accurately capturing geometry at the leading edge of objects. It provides excellent resolution of the leading edge curvature at the stagnation point on wings. Our Volvo V8 Supercars have a low aspect ratio wing which is a controlled part (meaning every car has to have the same wing). This, combined with the wake departing the vehicle glass house, create an extremely complex onset flow that you would definitely not want to see on aircraft. We want to capture the development and separation of this flow as clearly as possible as it is such a pivotal aerodynamic component of the car.

CFD simulations involving 3D complex geometry have become the norm, however, this hasn’t lessened the…

AFMC (Australasian Fluid Mechanics Conference) is held biannually in Australia, and the 22nd AFMC2020 was…

Automotive
1. Evolution of the S60 V8 Supercar Aerodynamics
2. Supercar Webinar on design with CFD
3. The evolution of CFD at Garry Rogers Motorsport
4. 2D meshing with sources in Pointwise
Have a CFD project you'd like to talk about?
Get In Touch
Copyright Applied CCM Pty Ltd. 2014-2023 - All Rights Reserved
Back To Top
Search
By continuing to browse the site you are agreeing to our use of cookies.